You are a death metal viking cat, earning your place in the drinking halls of Valhalla by casting a wake of blood and carnage upon the blighted earth in each of your 9 lives. Guided personally by DEATH, your merry band will leave a wake of ruin ending only at the hands of a truly worthy foe. Find treasures, trade with merchants, mercenaries, or ghosts, and follow DEATH to seek worthy foes, fiendish traps, and ensure your place among the greatest warriors of catkind!

Designed for fast-paced, high energy play, 9 Lives to Valhalla is a standalone, rules-light tabletop rpg for 2-6 players in the classic tradition of animal adventurers in a surprisingly dark fantasy world. It’s perfect for over-the-top livestreams, single-session games at your kitchen table, and joining your friends on a journey of brutal ferocity as you rampage through a cursed landscape against anyone who would resurrect ancient tyrannies.

Gem Room Games embarked on their first Kickstarter to fund a print run of the frenetic game, barely contained in a 32-page staplebound zine, on February 1 at https://www.kickstarter.com/projects/gemroomgames/9-lives-to-valhalla. Their primary funding goal was reached within two hours. Gem Room Games then blew past their funding stretch goal within 4 hours of launch, and an unannounced stretch goal of a companion adventure titled The Wreck of the Murderous by the end of the first day. In addition to offering backer tiers including digital and physical copies of the game and an original print-ready character sheet, Gem Room Games presented the opportunity to see your own pet immortalized as a piece of in-game art, lovingly rendered in full viking regalia with a signed print for your home. Funding concluded February 28 at 839% funded with 549 backers. Pre-orders were available through Backerkit throughout the five month development period. 9 Lives to Valhalla and  The Wreck of the Murderous will be available for purchase in August, 2022.

9 Lives to Valhalla is proud to be a part of the first ever Zine Month, and was featured alongside dozens of other independently produced indie zines at www.zinemonth.com.

Nine lives to stalk the earth! Nine times to die with sword in paw! Nine Lives to Valhalla!

The Wreck of the Murderous

On February 5th, Gem Room Games announced a major expansion to the 9 Lives to Valhalla funding campaign with the introduction of The Wreck of the Murderous. The 16-page supplementary adventure will be available in both print and digital editions. The Wreck of the Murderous finds a feline warband tossed upon the shores of an unknown island where, with their companion DEATH, they'll encounter roving animal gangs, crystalline caves,  leash cultists, and humanic horrors.

The Wreck of the Murderous will be available for purchase alongside 9 Lives to Valhalla.

Gem Room Games is a game design partnership based in Los Angeles, California. Dan Phipps and Kali Lawrie have been making tabletop games for a combined 10 years. Their mission: to make weirder, funnier, and faster games for people who’ve never enjoyed a tabletop RPG before.

“Growing up I was exposed to a lot of fantasy stories but consistently the weirdest and darkest were always about animals. From the classic Redwall series and Watership Down to Don Bluth’s fever dreams, I spent a lot of my childhood learning about the adventures of mice and rabbits instead of elves and dwarves. We wanted to make a game about the true nature of cats, and how they would see themselves if they inherited our world. It’s been almost 5 years since we wrote the first version of 9 Lives to Valhalla while listening to Amon Amarth’s Twilight of the Thunder God on repeat. It’s still some of my favorite work we’ve ever done.”
- Dan Phipps

“The glow up of 9 Lives to Valhalla has been so gratifying. It was our first foray into collaboration: a tiny zine made with public domain art, laid out in powerpoint, printed and stapled in our living room. I always believed that it deserved more love, and I’m thrilled to be giving it another shot. Now our little chaos game is updated with improved text, original art, and polished layout, ready to be printed into a book that will feel good to hold. I can’t wait to see the first copies and consider how much we’ve grown as collaborators.”
- Kali Lawrie

Advance Praise for 9 Lives to Valhalla

"Cozy rodent RPGs are cool and all, but it's about time we had a heavy metal cat game! 9 Lives to Valhalla is brutal in the best ways possible, and its simple, elegant mechanics keep things moving at the pace of a double bass drum."
–Tyler Crumrine, Possible Worlds Games

“This game is for anyone who's looked at a cat and glimpsed the bad ass hunter-warrior that lurks in the heart of their stalwart companion. Surely in another world cats are blessed by Valhalla, favored by feline gods, and seek out glory by Death's side! Gem Room Games has done it again, creating an evocative world and creative playground, this time inspired by heavy metal and the nine mythical lives that cats deserve!”
- Rae Nedjaji, Sword Queen Games

"9 Lives To Valhalla is a game that very much knows what it's about, and leans into it in all the right ways. Quick and to the point, you'll be telling the stories of your murder cat in no time. Not only that, but the text encourages you to bend and shape the game to fit the experience your table loves. Once you read it, you'll be dying (9 times) to play it."
- Spencer Campbell, Gila RPGs

"brutally adorable"
- Chase Carter, Dicebreaker, "9 Zine Month RPGs you should check out (and where to crowdfund them)"

High resolution art assets and logos may be found at https://drive.google.com/drive/folders/1sLw-tUII68Il4s8IV7JRHcXSvPktWb-8?usp=sharing

If you have additional questions, would like to schedule an interview, set up a time to play with us, or have any other questions please feel free to reach out!

Im in a state right now where, i will happily throw a stupid amount of money at this project just to have it in my hands NOW rather than wait until the first of march ^^'

Check out the Development log for news about additional assets and a 9 Lives to Valhalla sneak peek! 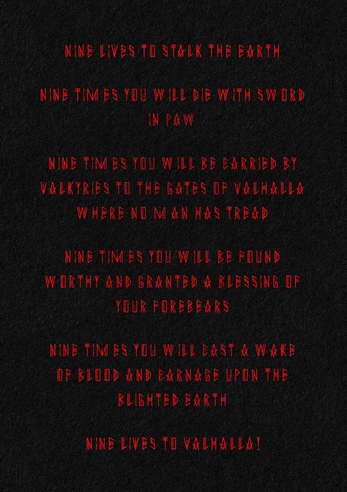 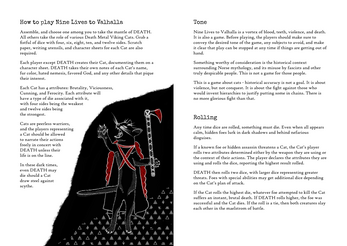 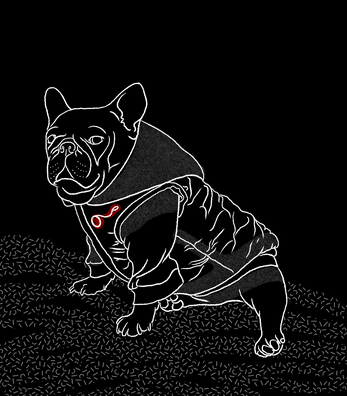