Life is tough for the cash-strapped in Pociopolis. Ever since the secret to immortality was discovered, nobody retires anymore! With all the steady jobs taken and no sign of any new ones opening up, there’s only one sure way to make some quick cash: sign up as a Subway Runner and work for the Metro Authority to hunt monsters and repair subway lines below the city.

SUBWAY RUNNERS is a Forged in the Dark game of gig economy adventures designed from the ground up to be played online by folks who are responsibly practicing social isolation. It uses online tools to quickly create random characters, gigs, and adventure details so players can get the ball rolling quickly.

We Got Wild with Random Generators!

Forged in the Dark with a Twist!

Like other Forged in the Dark games, you leverage your actions to take risky actions, get stressed and catch traumas, and do fun stuff to get promotions. Unlike any other Forged in the Dark game we know of, your list of actions is totally different from your fellow runners! You never know the trauma you're gonna get, from "rude" to "romantic"! Both your experience triggers and your benefits for doing them change from runner to runner and game to game! And if you don't like the runner you got, another file is just a click away.

Designed with Social Isolation In Mind!

A lot of folks are staying home right now, and making good choices for their community by limiting their in-person contact with others. Subway Runners is designed to run easy-breezy over discord, zoom, roll20, or wherever you hang out with your chums online! Toss a shared whiteboard in there if you're feeling fancy, or take notes in a shared google doc. On top of all that, the rules reference PDF is great to help players new to the FitD system get started quick.

The PDF has bookmarks!

That's not very cool, but Dan was real excited about it so we thought we'd mention it here.

In order to download this Tabletop RPG you must purchase it at or above the minimum price of $3 USD. You will get access to the following files:

Support this Tabletop RPG at or above a special price point to receive something exclusive.

These copies of Subway Runners are FREE for anyone staying at home socially isolating and looking for a game that's easy to play online!

If you missed your chance, reach out to @GemRoomGames to let us know and we'll add some more!

HellO! Can you add more isolation copies? Thank you.

Yes we can! There are more available now :)

I love the vibrant colors, but the dark purply blue background in the PDF is going to eat ink. I like to print them to get away from screens as I read. Any chance for a copy with white backdrop and a dark base text?

I find I can reference things better with a physical copy, also, oddly enough.

Let's see what we can do! A print friendly version is a great idea. You'll be the first to know when we've got one up.

Reply
easbaker1 year ago(+1)
Such a fun TTRPG! I ran this when a player was unable to join us for our regular D&D game and our DM wanted a little break. We ended up expanding on a previous Boy Problems game I ran for them for the set dressing, and they loved getting to explore a different side of the "city" we had built up together. The random generators helped us get the ball rolling quickly, and they ended up really enjoying the randomized characters. One of the other players mentioned keeping this TTRPG in our back pockets for when we finish D&D early and want to keep the fun going! We'll definitely be coming back to Subway Runners!
Reply
dandoze1 year ago(+1)

I've been wanting to try GMing and this game seemed like a really easy way to jump into it... and it was! Game went great, everyone had fun, and I felt supported by all the structure and suggestions while still having room to make up weird stuff. Highly recommend in general, and especially to other first-time GMs.

Subway Runners is a 32 page, color, Forged In The Dark game about a neon weird city where immortality has been discovered so no one gets to retire, and you have to work a gig job hunting monsters in the train tunnels.

It's fun. It's pulp. It operates on a little bit of dream logic, but if it were a movie, I would for sure watch it.

The Forged In The Dark engine has also been modded a little bit here, in a way that absolutely works for the game. The players absorb a little bit of the GM role (they're the final arbiter as to whether a roll needs to be made, and also what trait they roll,) there's some dice pools that are just part of the character and not traits, healing and stress recovery happen automatically at checkpoints, and the game fully embraces being a thing born of 2020, designing its intended play around online tools.

In fact, both characters and missions are created by an online generator, which the book links to, fully automating that aspect of setup.

This may also be a downside for people, as the game isn't quite fully playable without the generators.

This and some other gameplay elements felt a little odd (the skill list is gargantuan for a FitD game,) but in the end as long as you have an internet connection, nothing interferes with the quality of the game.

Overall, this thing is like a chill synth-pop version of Metro 2033. I earnestly recommend it to anyone who likes clever worldbuilding, solid balance, and mild-mannered hellscapes. Also probably anyone who likes Red Markets---as there's definitely a similar feeling at play here, if with a different tone.

Do you have a youtube channel or newsletter we can subscribe to? All your reviews are so thoughtful!

Whoah, thank you. I have my twitter account linked off of my profile, but the reviews aren't really a formal thing. I just decided to try and work my way through all the trpgs that were in the big bundle. I struggle to get feedback and ratings on games, so I sort of figured other people might be in the same spot, and I'm hoping some of my reviews help a bit.

I have also been very impressed with these reviews. Every time I find a thoughtful and thorough one from one of these bundle games, it's almost always signed 'kumadal'. Thank you!

Fun game to play online, easy to get into. The random generators are a bit limited though, some options like station names and mission rewards start repeating once you reload the page a few times, but it provides a good enough framework if you want to homebrew extra content.

I've run two oneshots of this and it's awesome! The random generators make it really easy to just pick up and play.

A tight revisitation of the Forged in the Dark system, patched onto a game about the gig economy. The book itself is light on setting and seeds, but that's because its authors took the brilliant decision to set up online random generators for pretty much everything. That's a wonderful idea which I hope to see in more games!

Um, I could not message you guys on twitter. Is there any problem there?

You should be able to DM us now

You should be able to DM us now

Um... Bookmarks are wicked cool! When a game PDF doesn't have them, my heart is a little sad, buying a copy, thanks for making this.

Thanks for supporting bookmarked PDFs! I promise we'll do High Magic Lowlives once the order of the text is more finalized :)

Reply
The Nerdy Paper Games of Rob Hebert2 years ago(+2)

This game is totally zonkers. Love it.

Aww, Thanks Rob! We made it as zonkers as we knew how! 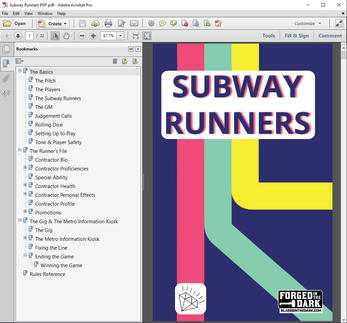 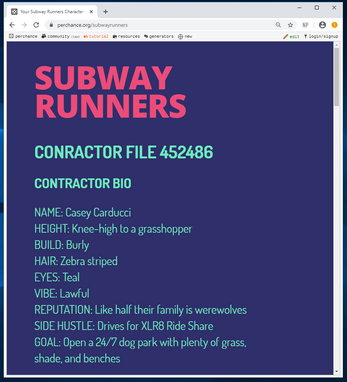 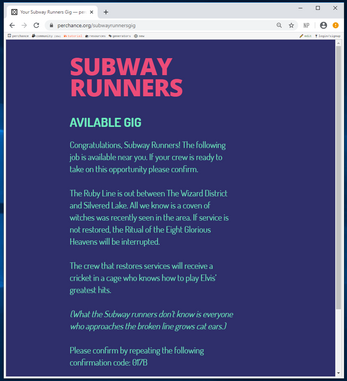 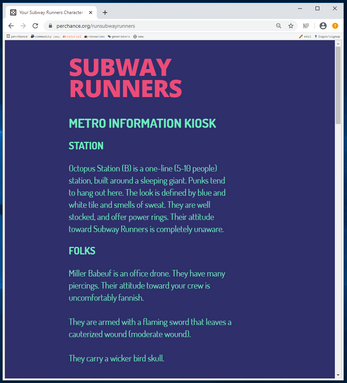