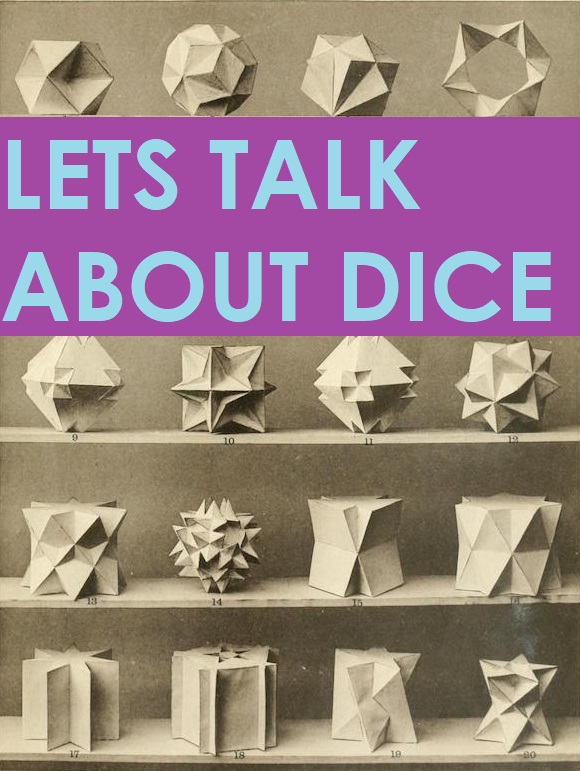 The resolution mechanic for High Magic Lowlives is modeled after World of Dungeons and Blades in the Dark, both written by John Harper. I really like this system: it’s clean, open, and drives the action forward with plenty of opportunity for the table to get their hands on the action. In essence it goes like this:

High Magic Lowlives doesn’t work EXACTLY like this (mostly because it doesn’t have a stress mechanic baked in, maybe it should?) but the main things I like about how this works is that the GM can throttle difficulty by breaking a task into multiple rolls (you have to pierce the armor before you can do damage) and altering how rough a bad roll is going to go for you (you’ll take damage, you’ll be exposed to attack, you’ll embarrass yourself).

I used the World of Dungeons system of rolling two six-sided dice with an added multiplier because it’s a known quantity, it works, and I wanted to get this game released. And it does work!

I’m drawn to tinker with the resolution mechanic, against my better judgement, for a few reasons. The first is mathematical. The higher your modifier the “safer” you are from rolling a result where you suffer consequences. This is appropriate, but it’s more safety than I’d like. I want the game to feel swingier, with the prospect of catastrophic failure lurking behind every die roll.

The second is for consistency. A throughline in High Magic Lowlives is the use of die size as a metric of quality. Four-sided dice represent garbage, twelve-sided dice represent the glorious. Garbage situations are about to break down, garbage weapons do pitiful damage, glorious foes are much less likely to run, and glorious environments are much more likely to reveal their beauty and secrets over cruel bandits. Except with your attributes which are measured from 0 to 3.

So, what happens when you replace rolling 2 six-sided dice and modifying the result with rolling dice of different sizes? After spending a lot of time at anydice that I should have spent elsewhere, a few trends emerged:

A (bad) data visualization of the outcomes follows: 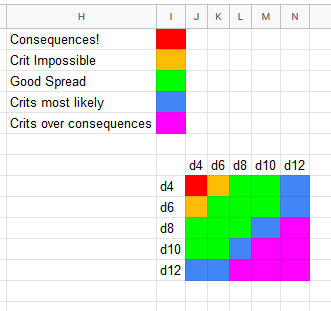 Red: The chances to succeed are extremely small, even with consequences

Yellow: you cannot roll a 12+, but you have a chance to succeed on some level

Green: 7-9 is the most likely outcome. The sweet spot.

Blue: The most likely outcome is a 12+, but still good chances you will suffer some manner of consequence

Vaporwave Pink: You are more likely to roll a critical success than any outcome where you would suffer a consequence COMBINED.

As you can see, things start off OK but gradually get out of hand as you start rolling d10s and d12s. Things rocket into critical success territory. However, by raising the threshold for a critical success to 14 you see something like this: 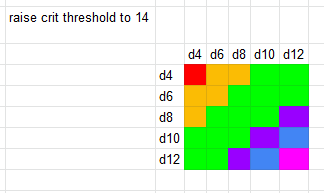 Still pretty wild around the higher end but much more manageable.

The takeaway here for me is that it’s POSSIBLE to replace the attributes as positive modifiers to a 2d6 roll with a system where you roll dice of two different sizes with a relatively minor tweak to the way crits are resolved, though obviously getting access to a twelve-sided die should be difficult or possibly temporary. This isn’t a plug-and-play update, as a number of derived attributes rely on static numbers instead of die sizes (your MP, inventory load, etc). But it’s definitely something I’d like to explore in a zine of optional rules down the line.

Anyways thanks for joining me on a strange math journey. Small update: I’m going to try and have a draft of the promised tutorial adventure finished by the end of the week, which should hopefully turn around quickly and be available for you soon.