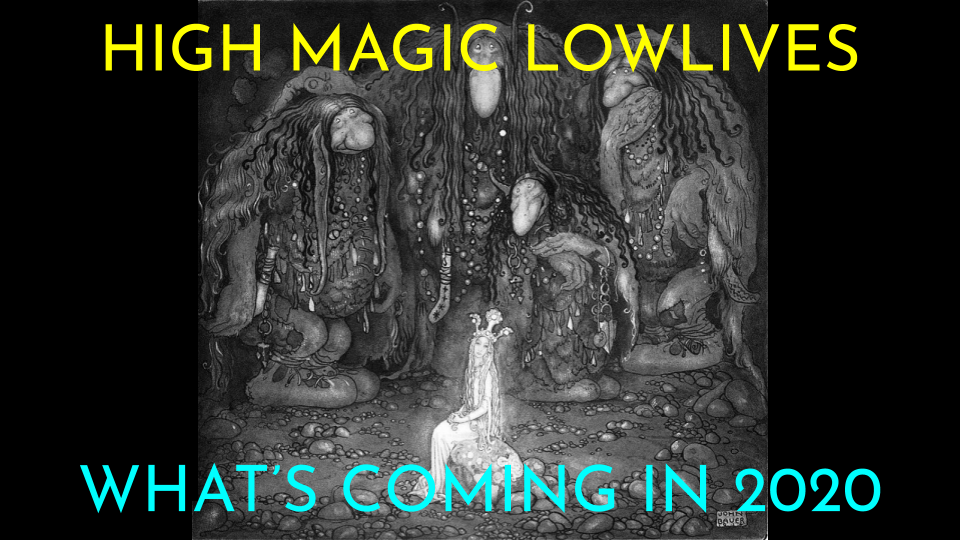 As we approach six months since the release of High Magic Lowlives we thought it’d be a good time to break down some of the landmarks on our release roadmap. Now that we’ve had a chance to give the game some more playtesting and digest the feedback we’ve received, we're focusing on a few areas where the rules can be improved.

First, we’ll be streamlining character creation and the character sheets - some of this work can be seen in the Happy Jack’s Actual Play of High Magic Lowlives. Having a folio to help players make characters and reorganizing the character sheet to organize things in order made the whole experience a lot easier to guide and the updates to the leading questions prompted some great worldbuilding. Right now there are some gameplay elements you only see in character creation - the use of tarot cards and 20-sided dice are unique to this phase of play. In the interest of consistency and keeping the list of required materials tight, we’ll look at other ways to roll for backgrounds and summon your zodiac.

The second major focus is on how your cell phone works. When first writing the game I was interested in playing with more prescriptive abilities in combat as a way to introduce high-risk high-reward tactics. Your lowlife’s cell phone was a natural spot to introduce the same idea - it provides a counterpoint to magic which is intentionally madcap and vague  in how it provides opportunities to the lowlife and the GM. The issue is that players, so far, have been smart. Given the risk of serious injury that comes with combat they’ve used the tools at their disposal to circumvent combat entirely.

This is, obviously, great but it means that the cheese stands alone when it comes to cell phones. I want to build on the established core mechanics of attribute checks and risk dice, not to introduce a new set of rules that only apply in that specific context. Furthermore, the benefits to using your phone will be ramped up, with the opportunity for sponsored posts to give you a chance to acquire even more treasure on your adventures.

Finally, advancement needs to be cleaned up. I like the gold-for-xp system in play that rewards treasure over gold and forces some kind of rudimentary inventory management. The work we’ve already done in character creation has opened up some new potential avenues for making advancement more clear and an interesting opportunity for players to drive the story. Overall we want it in a place where it isn’t prescriptive but gives the table a toolbox to potentially drive things forward.

Beyond these three main areas of focus the entire manuscript will want review and punch-up for consistency, quality, and organization. Once we’re pretty sure the text is where we want it, we can start working accessibility and generally making the PDF easier to navigate with bookmarks and an index. Beyond that any work SHOULD primarily take the form of improving the art and layout or otherwise working toward making the game easier for new players to learn and muck about with.

Speaking of which, we haven’t forgotten our promise to include a tutorial adventure with the game. Once we’re happy with the last of these outlying mechanics we’ll be able to really dig into the meat of that text to ensure that we’re teaching players the right game. Once that starts to pop off we’ll be showing it off here.

Thanks everyone for your patience! Our timeline for these developments are a little bit dependant on our newest team member who is 6 months old and needs a lot of oversight. Finally, remember to rate the game. Each one has a huge impact on the physical games category on itch!

Excited for these changes and looking forward to seeing this evolve!

Thanks! We're really excited to show it off soon*

*Gosh I hope it's soon